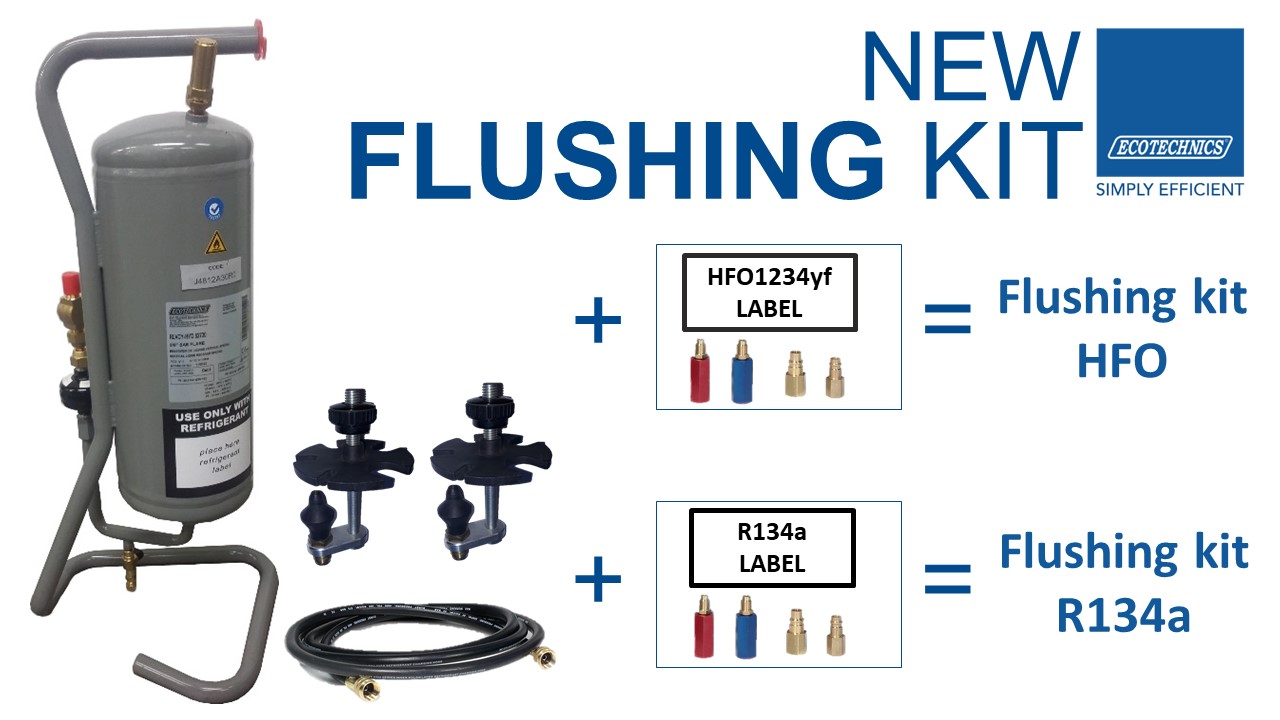 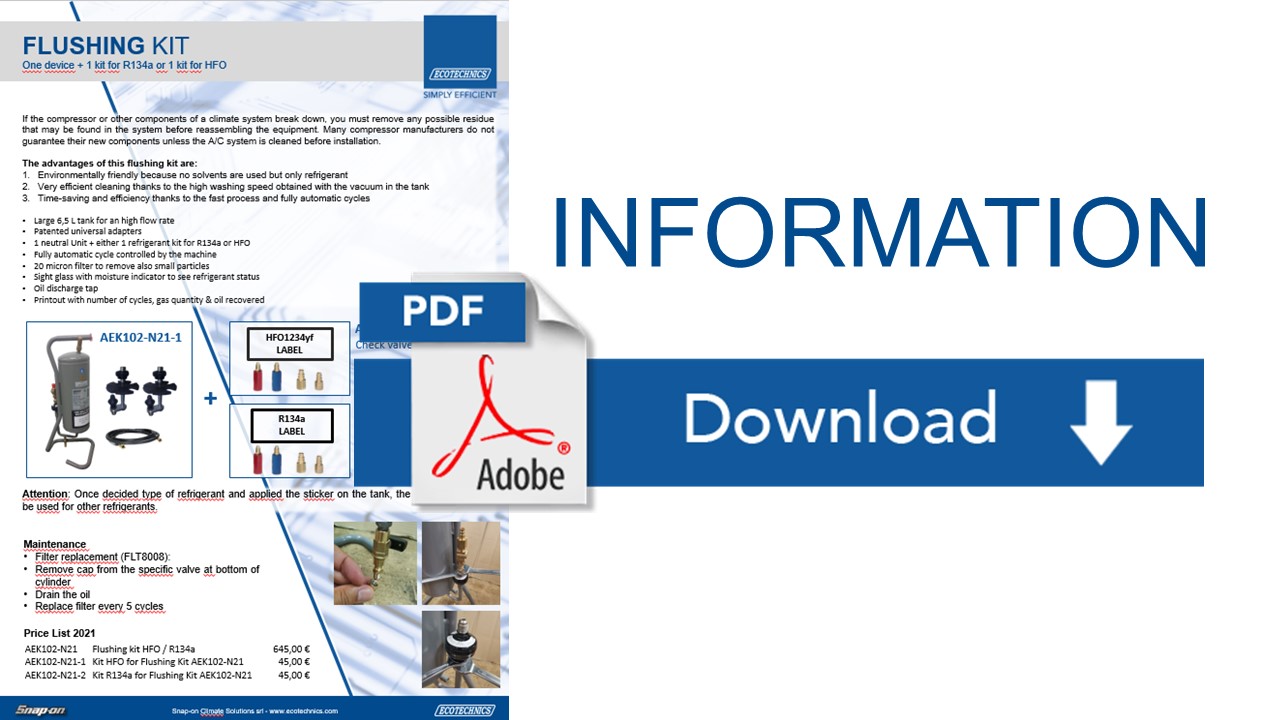 If the compressor or other components of a climate system break down, you must remove any possible residue that may be found in the system before reassembling the equipment. Many compressor manufacturers do not guarantee their new components unless the A/C system is cleaned before installation.

The advantages of this flushing kit are: 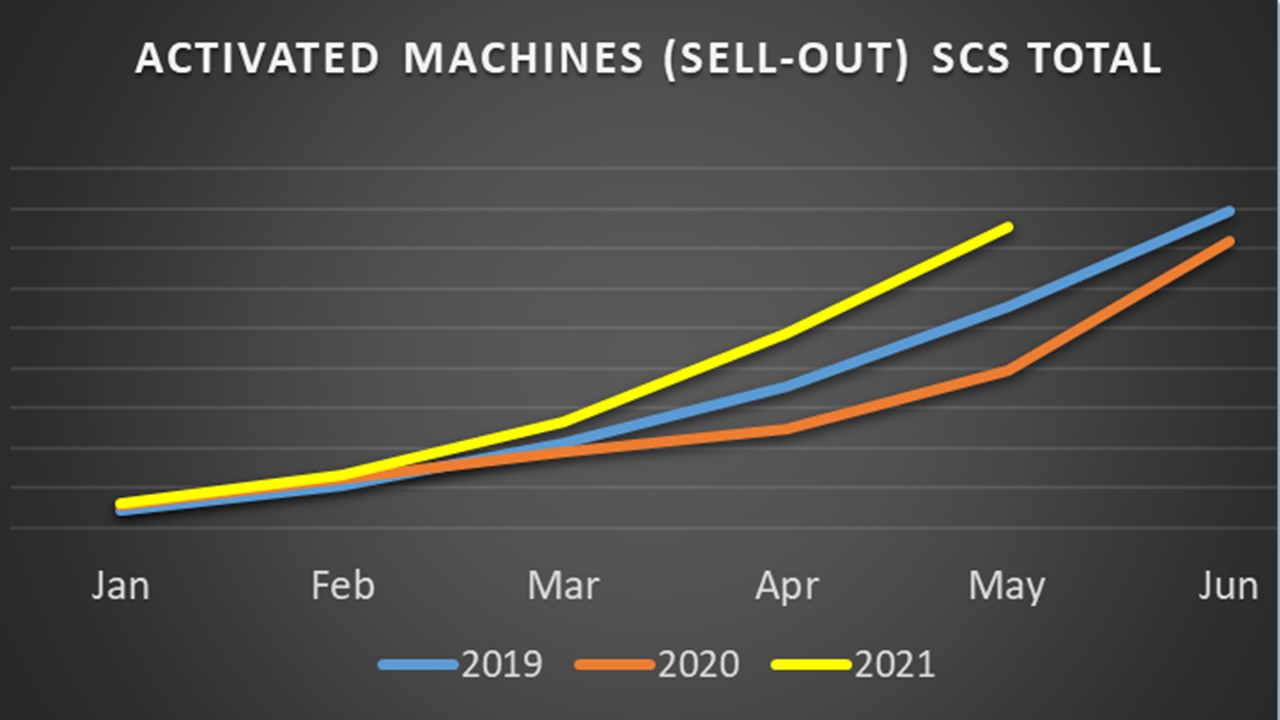 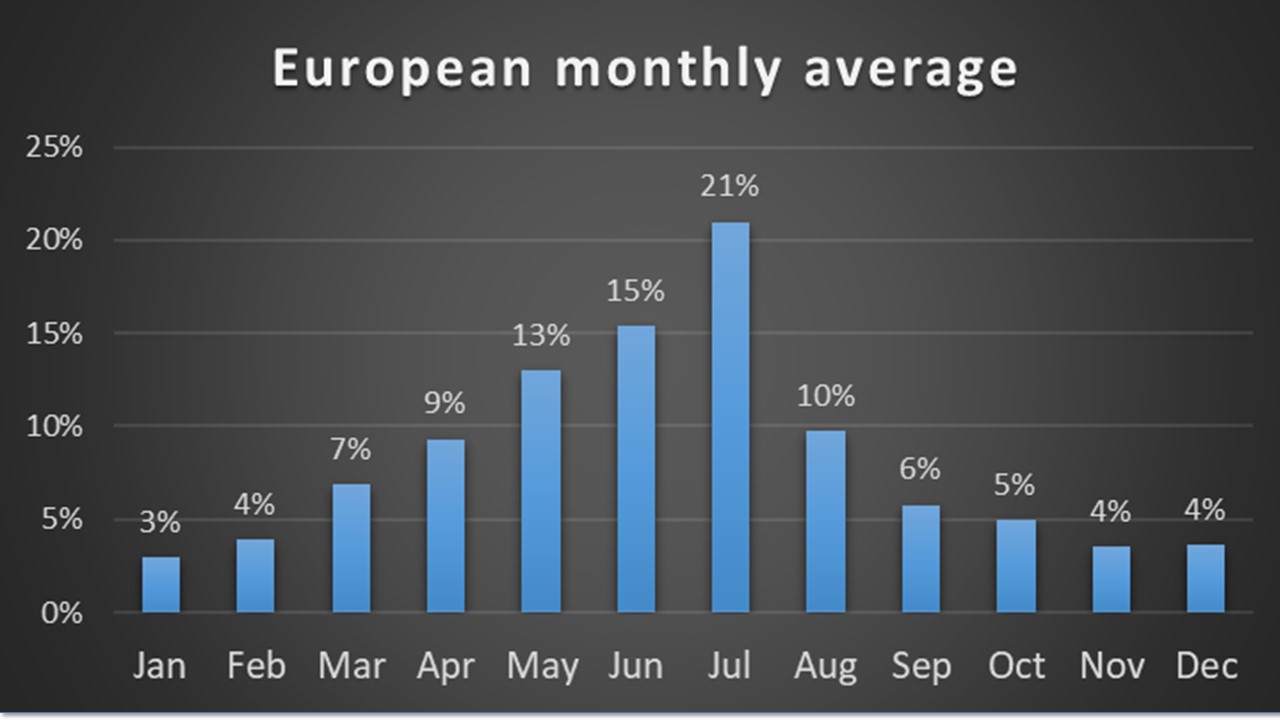 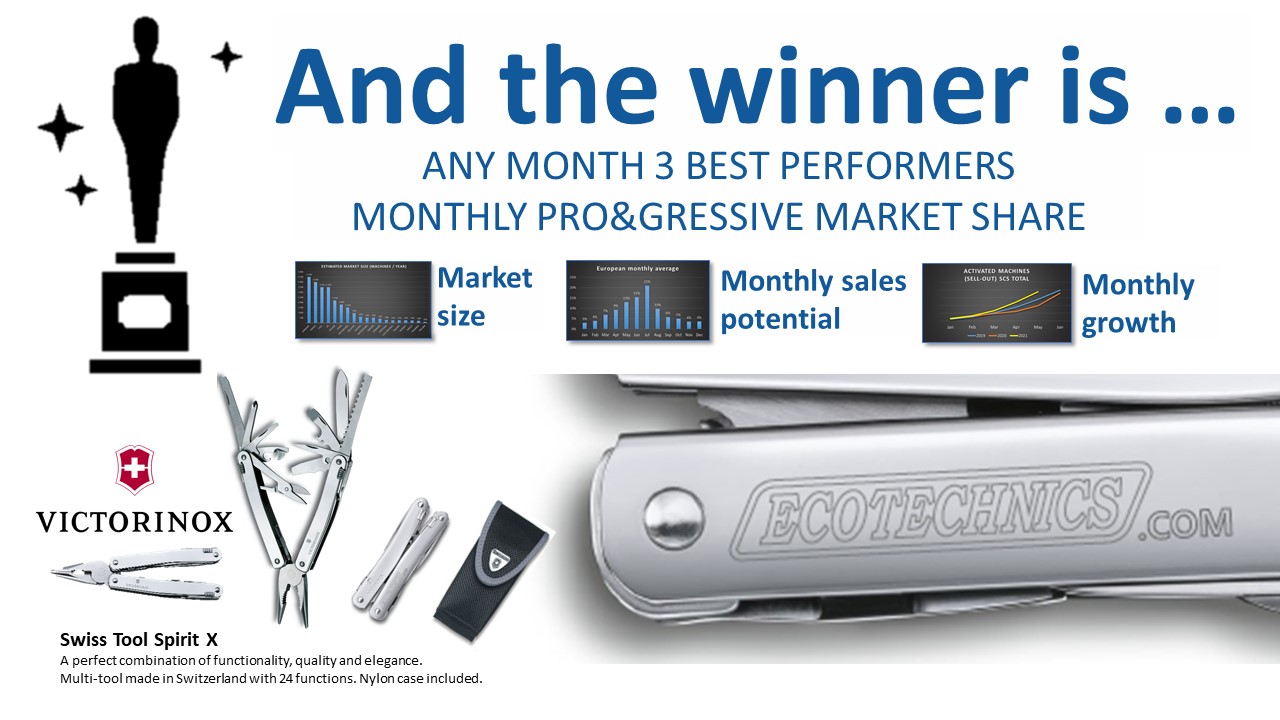 2021 is an Airconditioning year. Workshops invest in A/C Stations. The purchase of new A/C stations is among workshop’s priorities. By the first 5 month of the year, purchase strongly grow with an average of more than 30% compared to the same period on 2019. The strong growth of more than 90% compared with 2020 doesn’t represent realistic value due to lock-down period with rather strong impact in many countries. Purchase attitude is positive in all geographical areas. Extraordinary are eastern and southern part of Europe.

HFO1234yf – R134a Trend by type of refrigerant. Step by step vehicles with HFO system are growing. This is of strong impact on the sales of A/C Stations. In 2020 HFO stations represented 25% of the machines. The HFO share nearby doubled to 48% during the first 5 months of 2021. R134a decreased from 61% of machines in 2020 to 43%. Interesting the high share of Ecotechnics ECK TWIN 12 for both refrigerants, especially in central and north Europe where it’s 14% of the A/C Stations and 25% of workshop’s investments.

The trend by refrigerant type is homogeneous in all areas. Except Eastern Europe where R134a share still maintains 70%.

Award Winning Distributors: any month 3 of best performing Partners are awarded. A fast competitive context shows constantly effectiveness of sales programs and monthly performance. The winners reached highest monthly result compared to the monthly market potential. An objective principle that also grants partners in small countries of low potential to be among the winners. 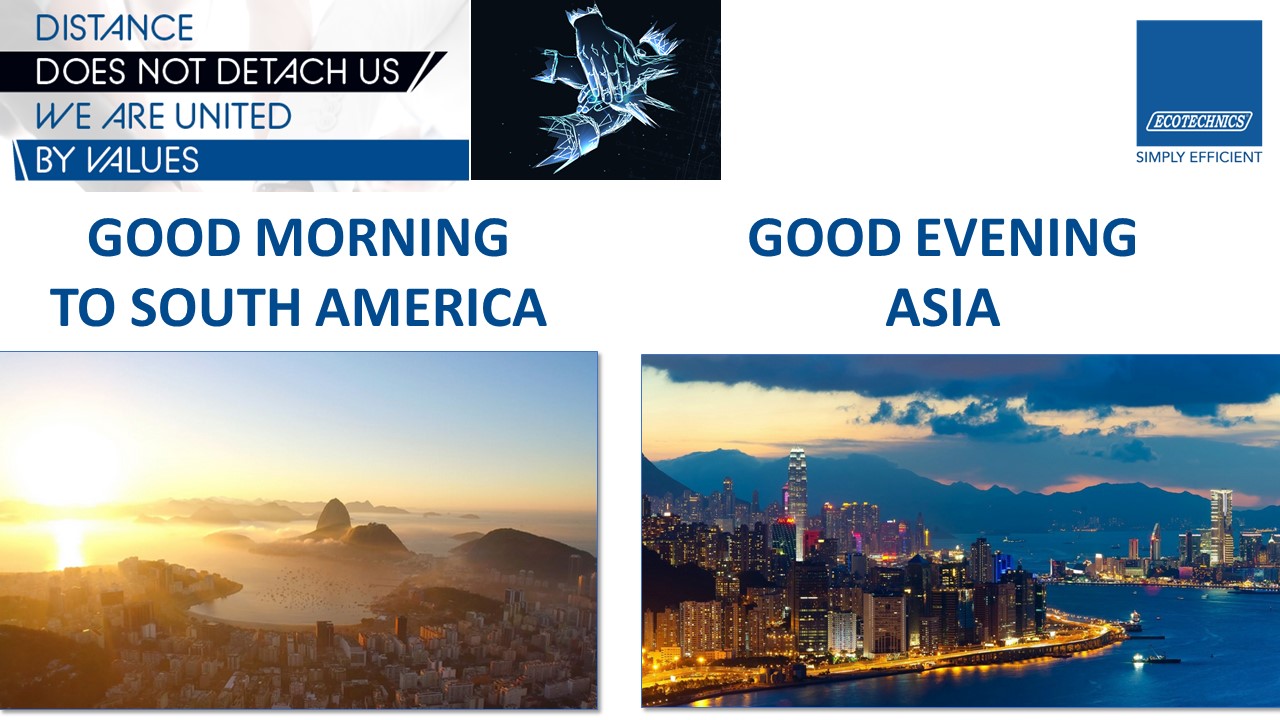 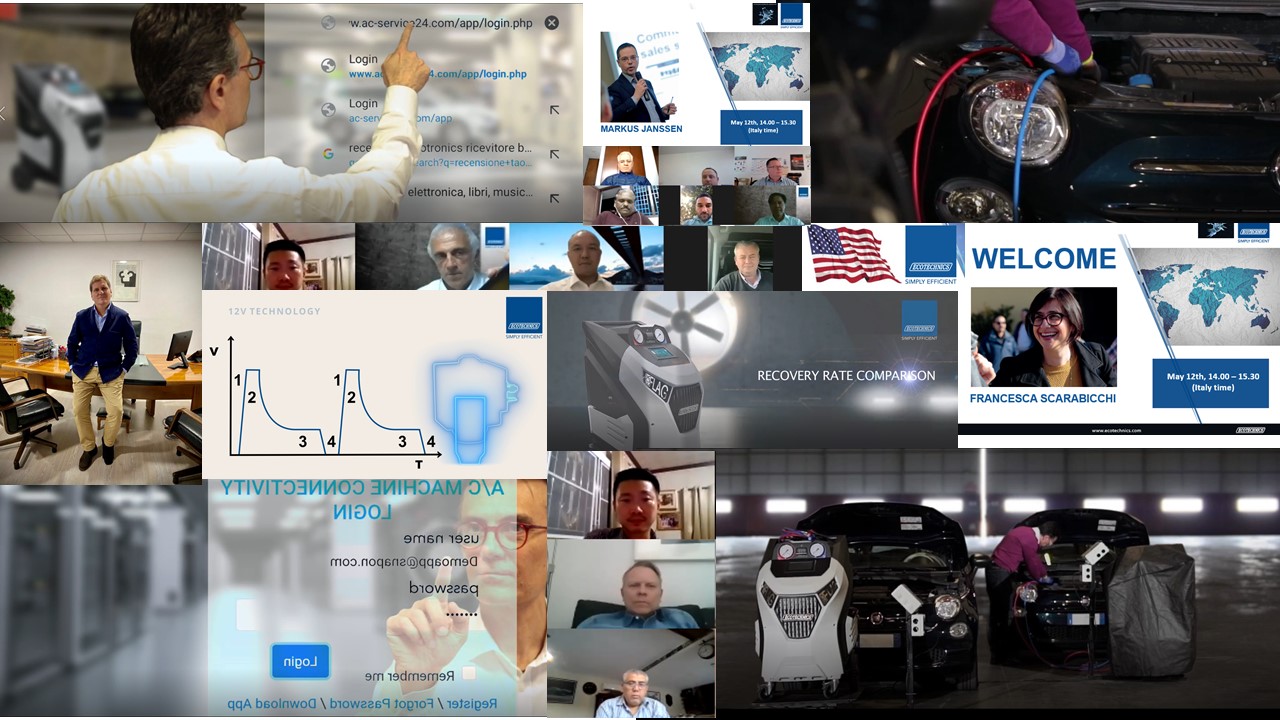 Distance does not detach us – we are united by values

More than 120 united by values

It was a great pleasure to meet our distribution partners from all over the world on the occasion of the FIRST ONLINE ECOTECHNICS DISTRIBUTOR MEETING held on 2021 May 12th.

Talking to each other, sharing and listening to stories from all over the world is a vital emotion and confirms the long-lasting relationships well beyond just products and services.

Warm greetings to all participants from the entire Ecotechnics Team. 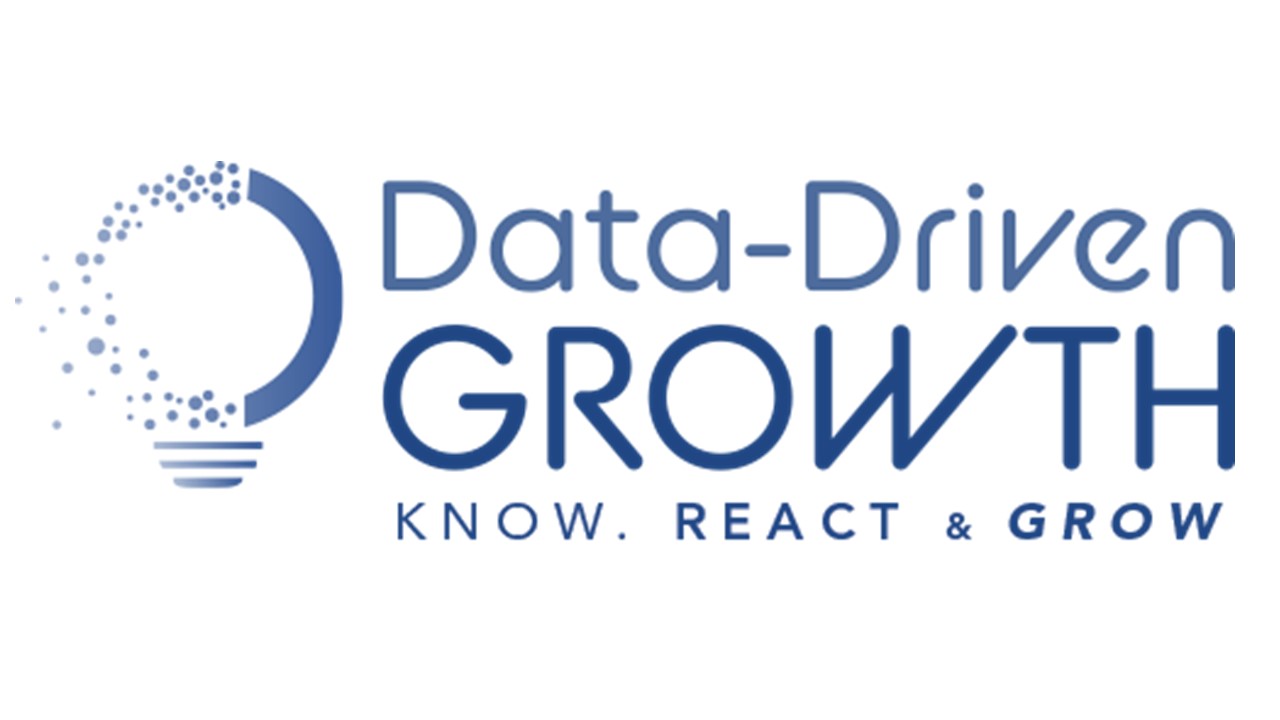 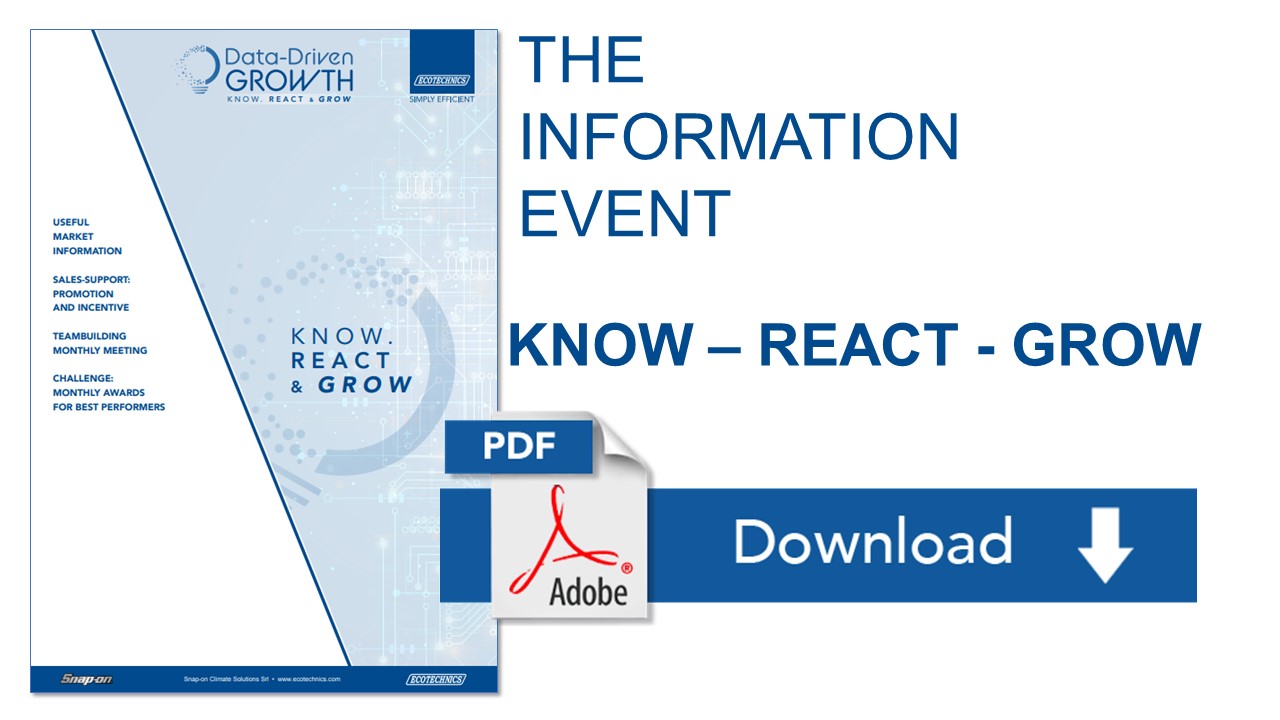 Ecotechnics connects the best professionals of its distribution network. On the occasion of regular (virtual) meetings, the “Data-Driven Growth” program puts data and analytics of market information in focus. Share market information and prompt sales progress is an outstanding Team Building occasion. A strong Workgroup for best customer connection.

SCS is pleased to share these progress-information with its Partners as a highly helpful indicator for short-term implementation of targeted sales actions and their most efficient management in sales and purchase planning. 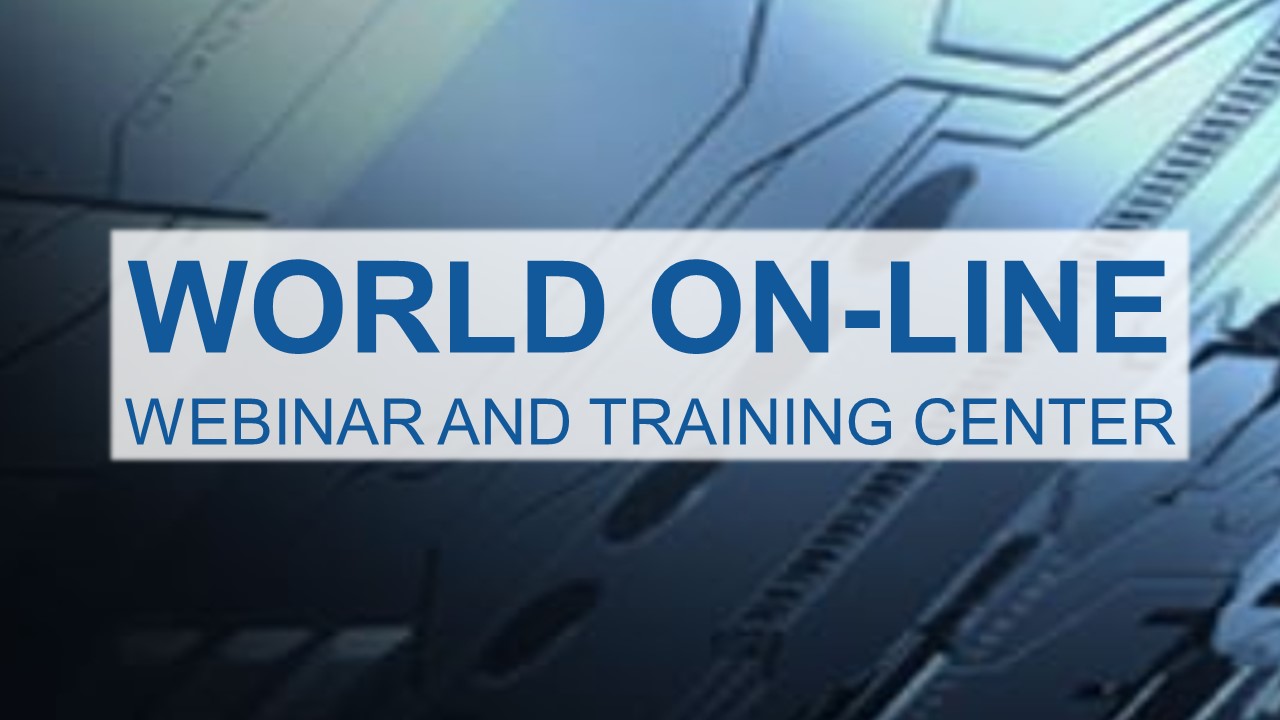 SCS deeply believe on training and communication, specially on this historical moment where meeting in presence are very limited and the online webinar represents a very good way to keep contact with people.

On this purpose we are glad to inform that on 9th of March 2021 SCS made a web training to his Inter-company partners with participation of over 40 people (sales and technical colleagues). The training was based on products and future developments on air conditioning 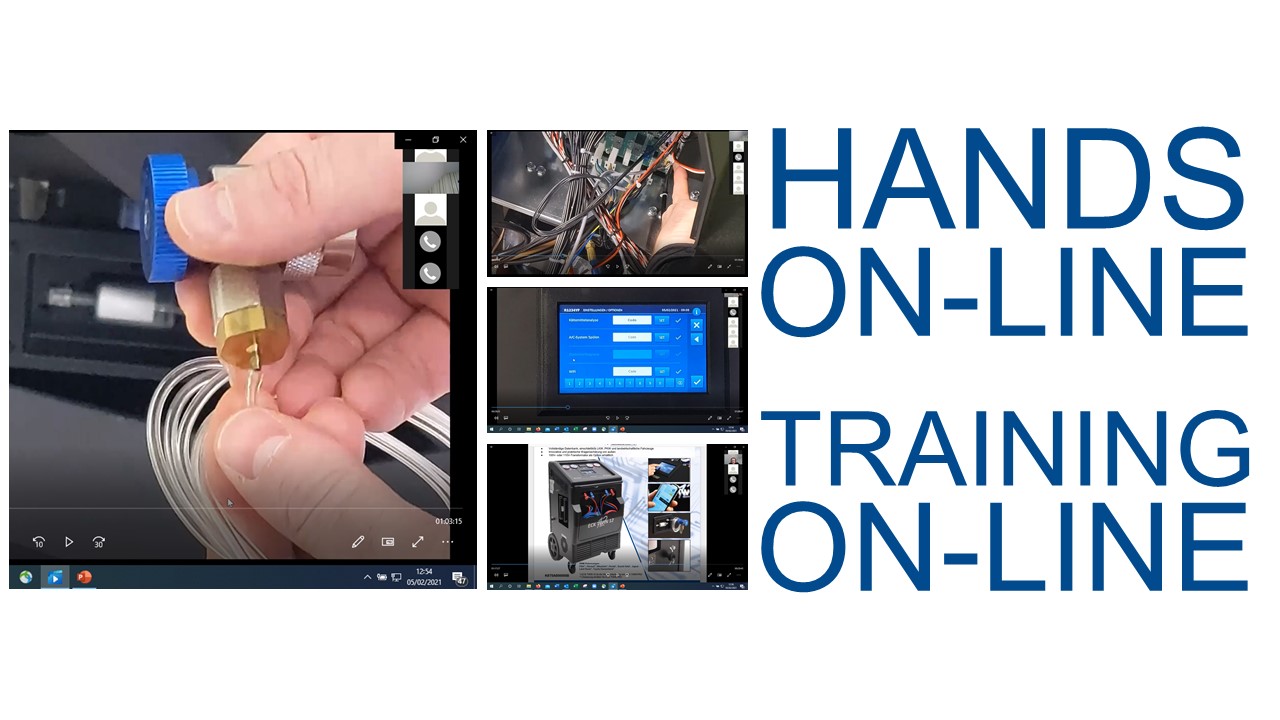 The online trainings represent an opportunity of excellent effectiveness: optimization of the time spent and excellent cost-benefit ratio without geographical distances.

Ecotechnics carries out more and more training meetings online. Not only in the Sales & Marketing areas. Even courses for technicians are possible thanks to the simultaneous use of video cameras. Small details can be viewed live and allow the trainer to explain in detail the various interventions for activation, repair or maintenance. Even the installation of accessories, such as the Gas Analyzer, is a very useful and appreciated content during the training sessions.

The Ecotechnics team is pleased to arrange an appointment and organize specific meetings with its partners. Worldwide. 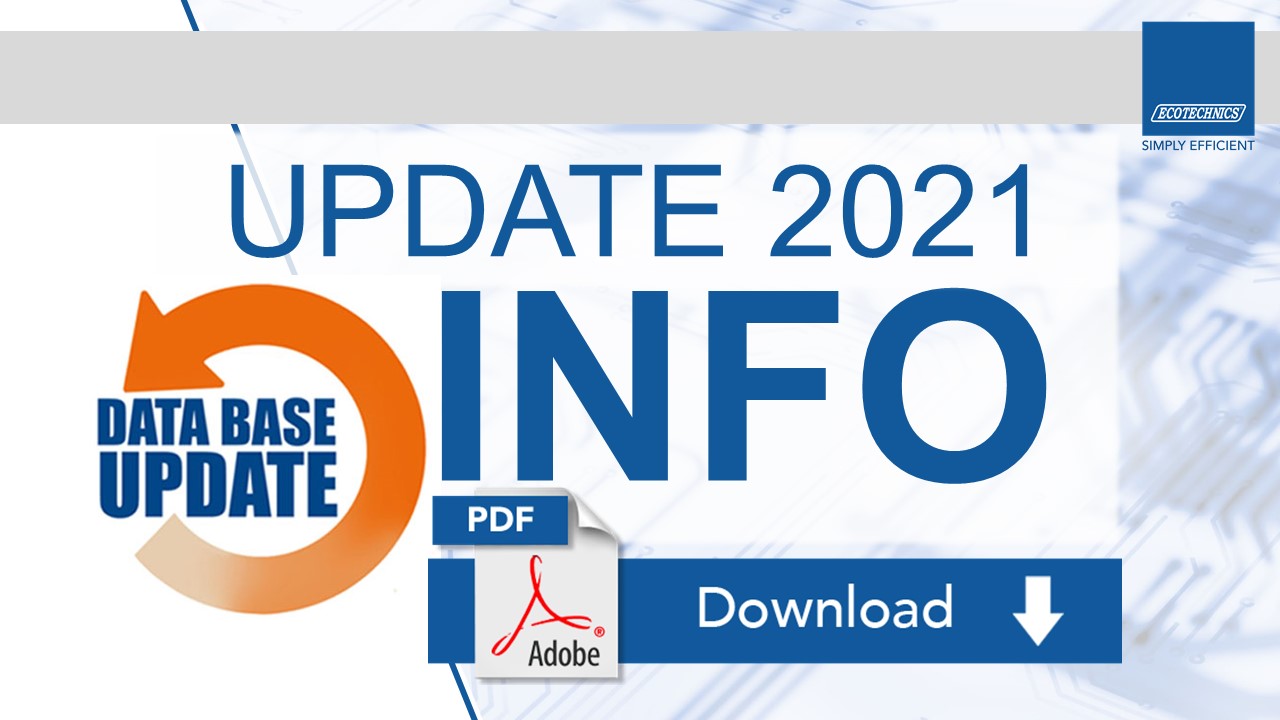 The Database update 2021 is available.

Only an updated database enables completely automatic workflow of the A/C station and avoids time-wasting research for refrigerant quantities. The new database is updated with most recent new models and updated information. The complete list of vehicles included in the 2021 database is available in AC-Servic24. 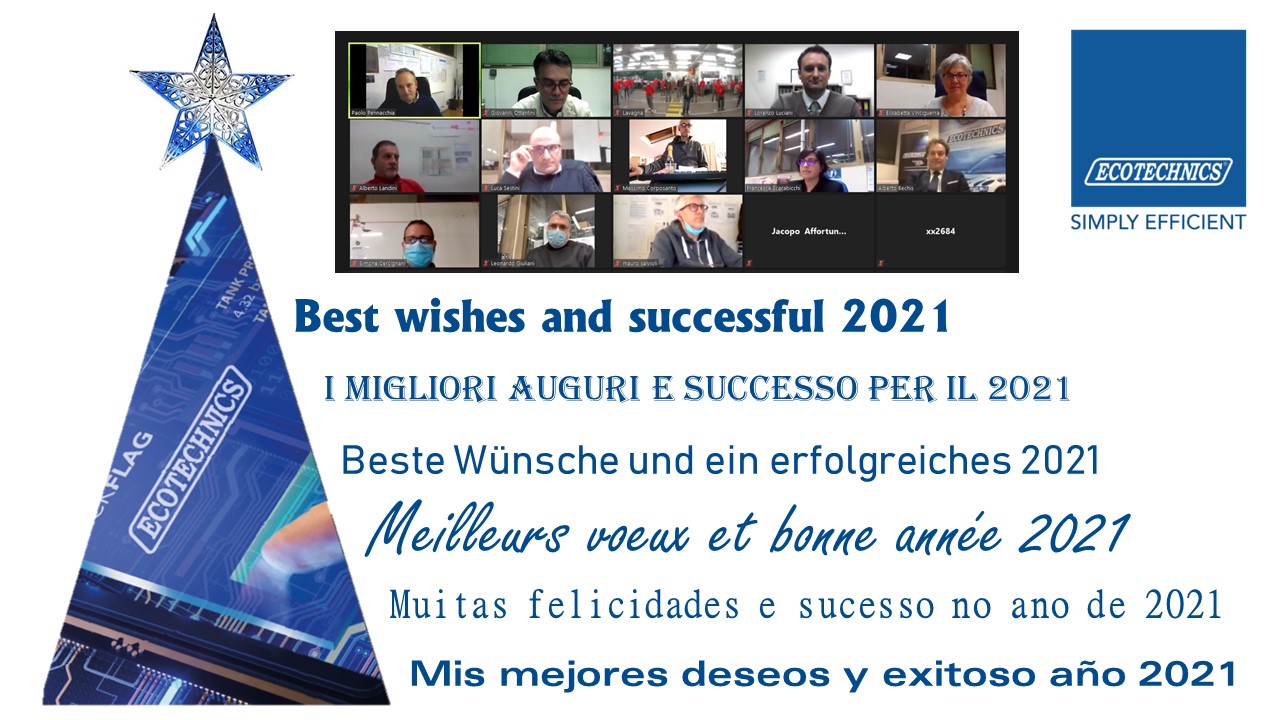 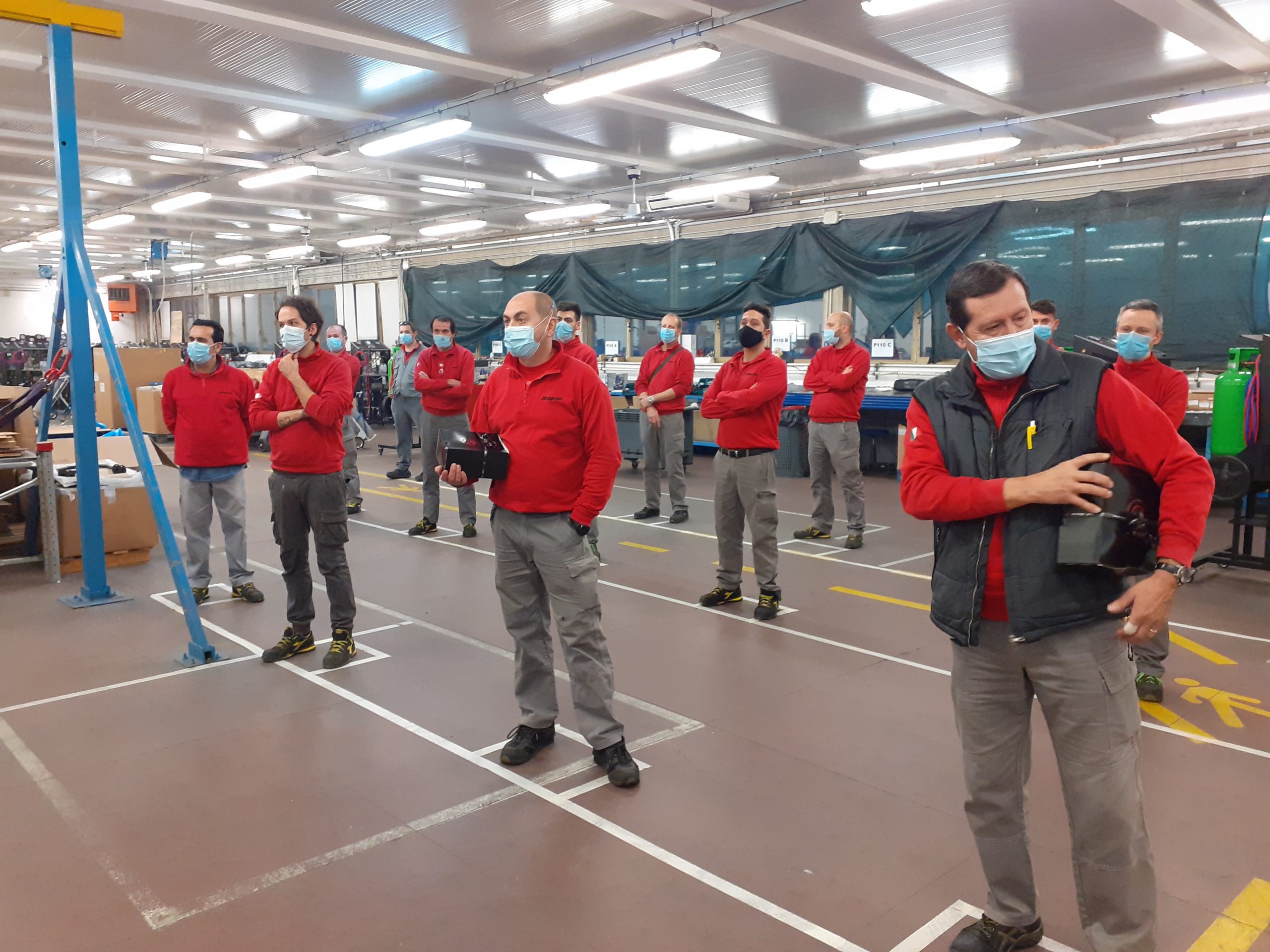 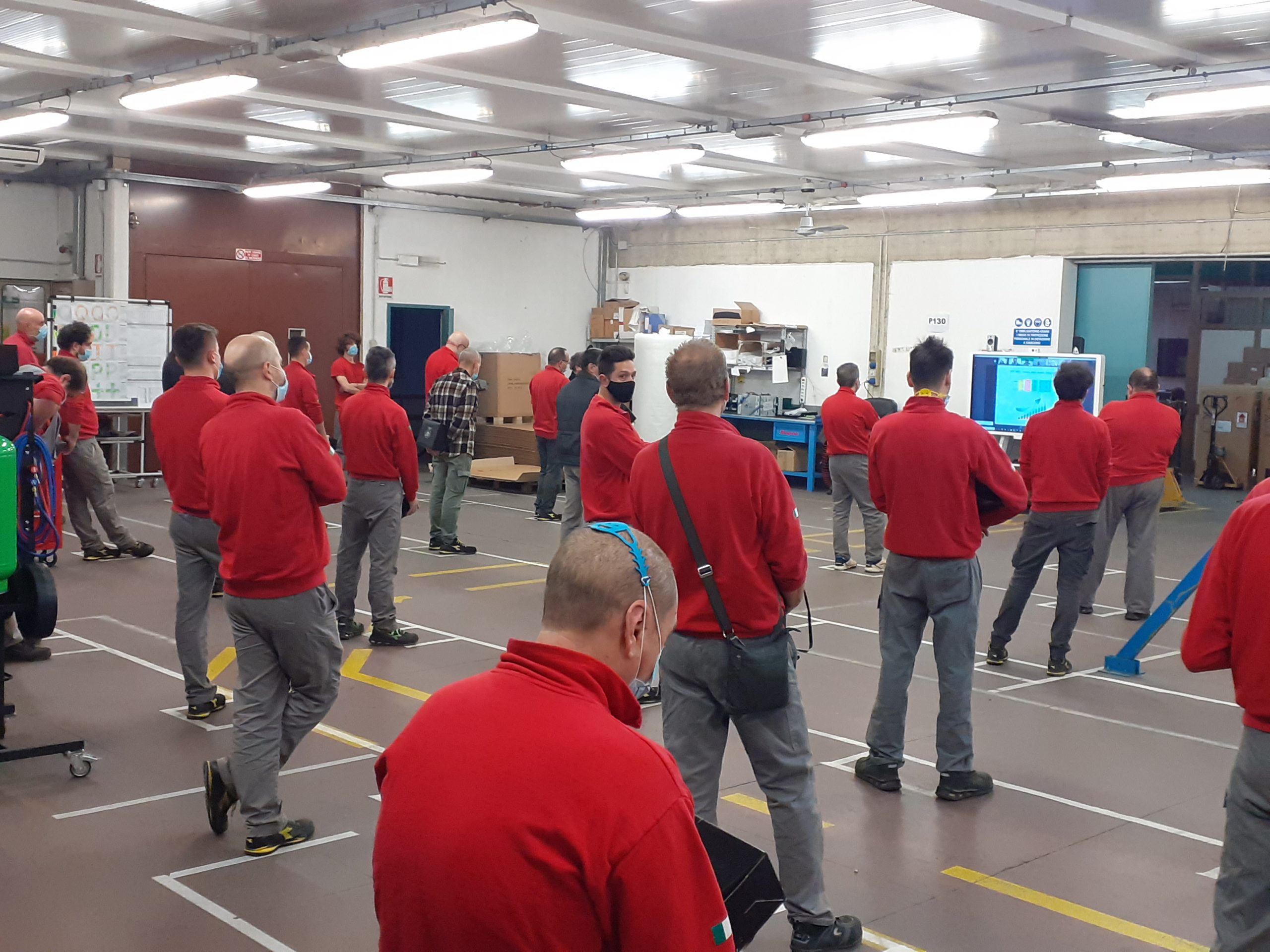 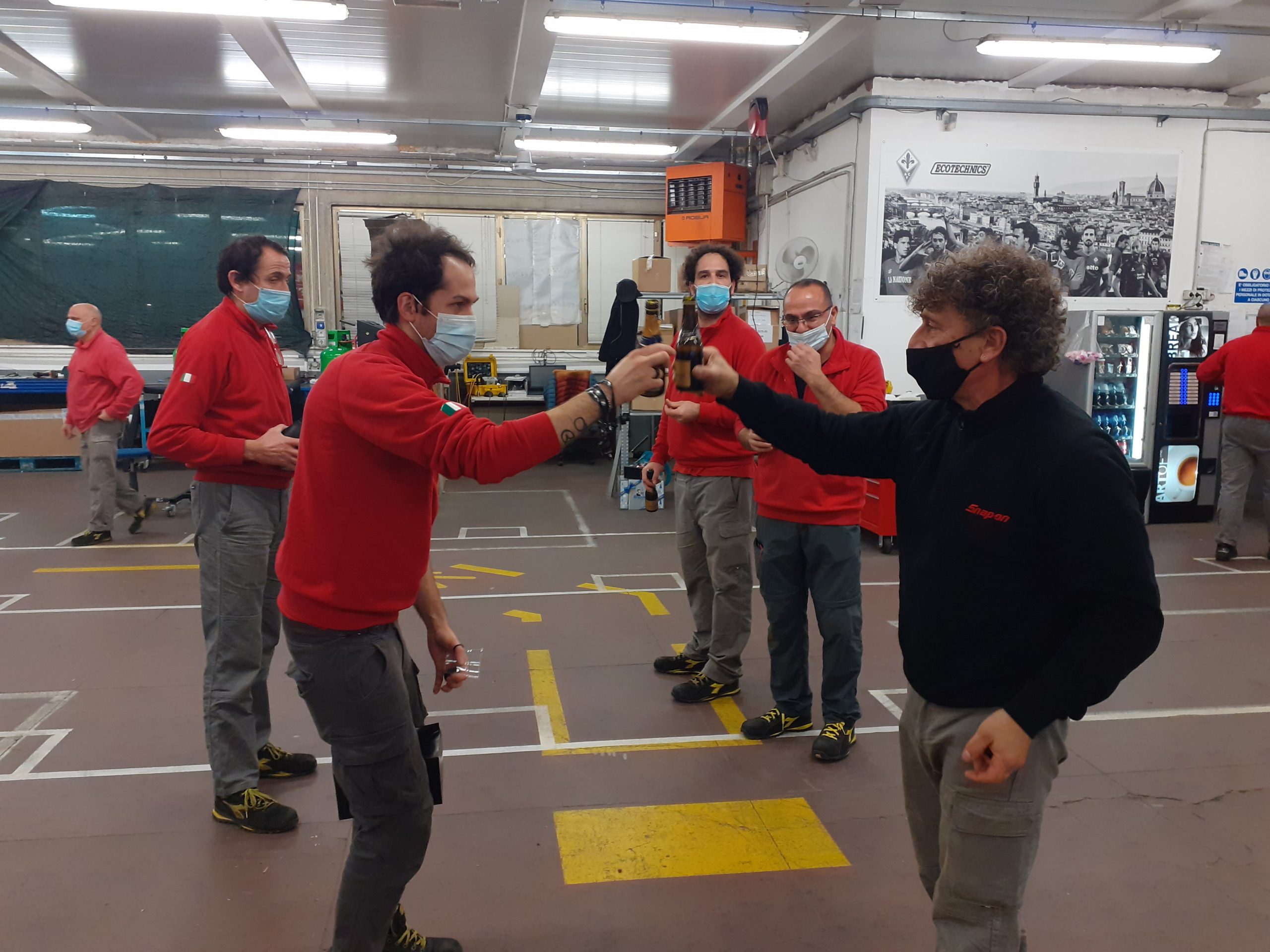 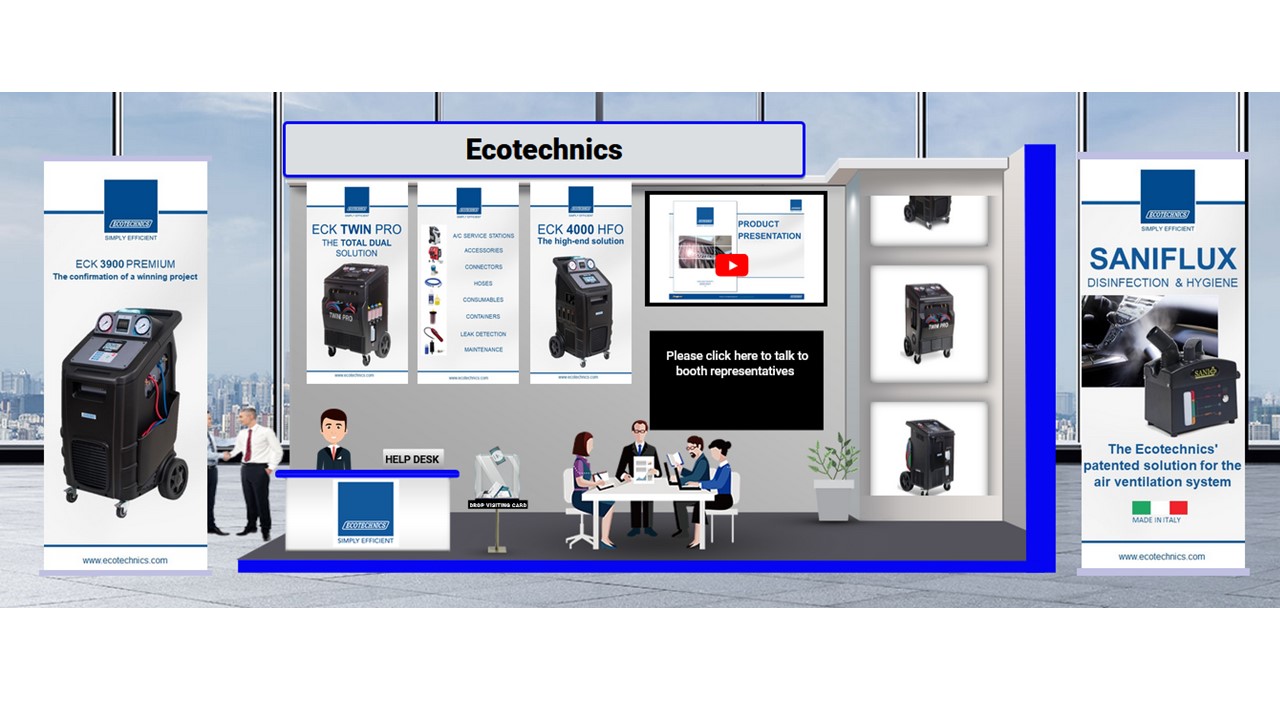 The limitations of mobility, home-office and smart working have profoundly changed habits and activities during 2020. Communication therefore requires new positive thoughts and digital methodologies. The efficient use and competent management of digital tools have become fundamental.

The month of November is dedicated to numerous actions to support sales. Our Partner Coparts has turned its important annual appointment into a month of virtual action and communications. The “fair” becomes digital and informative. The “Messe Spezial” magazine informs (virtual) visitors about the products and fair opportunities. Presentations, insights and interviews take place in an enormous “backstage” and will be registered for online publication. In Focus among the A/C stations ECK FLAG, ECK NEXT PRO and ECK TWIN PRO as well as the Gas Analyzer.

Since 2004, “Confederation of Indian industry (CII)” has played a vital role in the development and growth of the Automotive, components, spare parts and workshop equipment market in India and beyond.

In full respect for the health, safety and well-being of all stakeholders, Autoserve 2020, the ninth edition of “India’s Go to Event for Automotive Aftermarket” will be held virtually from November 23 to December 22, 2020.

Snap-on Climate Solutions is proud to participate with a virtual stand entirely dedicated to the Ecotechnics brand. The company’s Customer Connection actions thus have a further opportunity to adopt new best practices for growth. 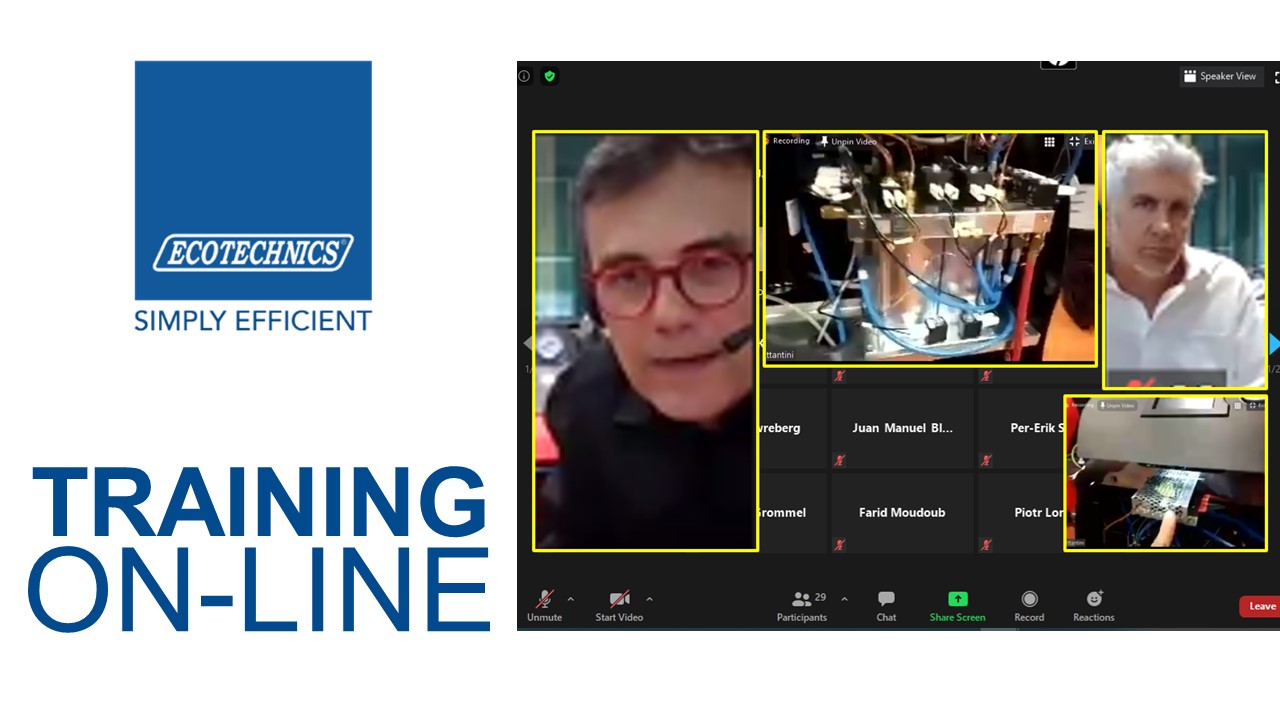 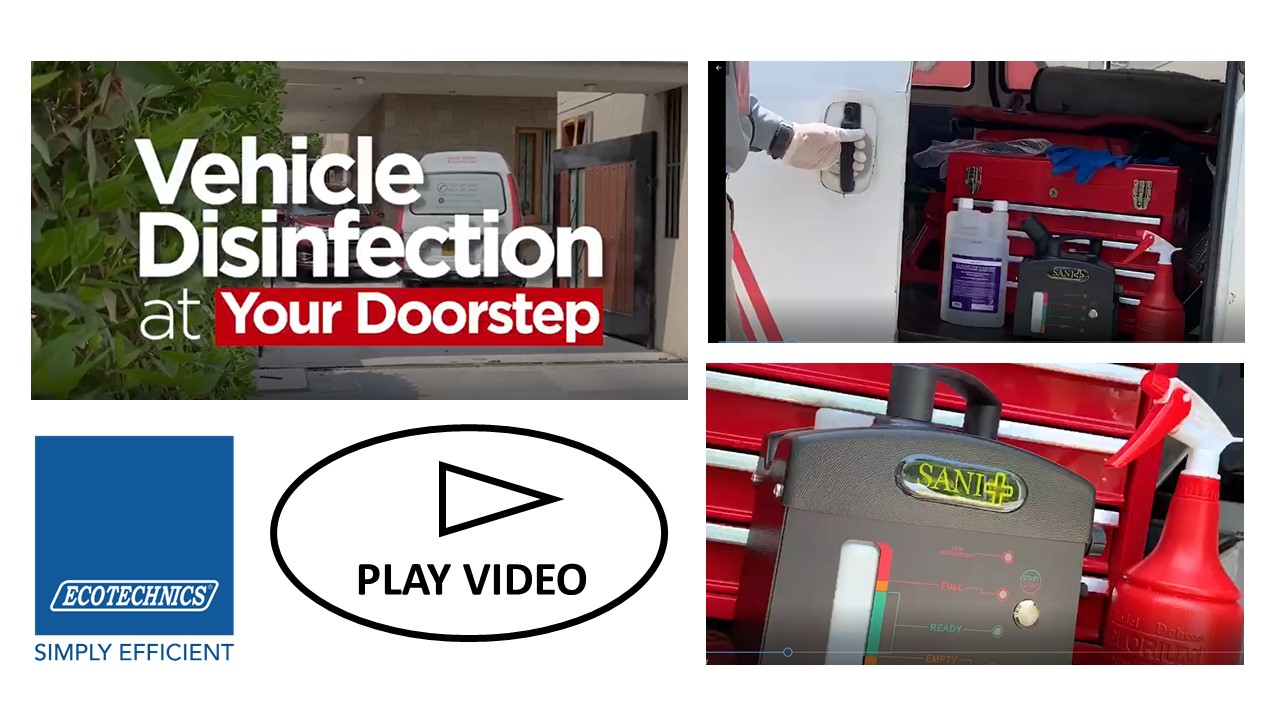 SANIFLUX – DISINFECTION ALSO AT YOUR DOORSTEP

Workshops’ activities change. The Covid-19 and lockdown period accelerated the introduction of car sanitization by the workshops. A sanitization intervention will become standard behaviour, an integral part of maintenance as today’s ordinary cleaning.

This new awareness and sensitivity concretely increase the commercial potential and business opportunities for each workshop.

An interesting promotional example of an Asian Ecotechnics partner with the help of Saniflux: disinfection at your doorstep.

We thank our Asian partner for this interesting example of active promotion of new opportunities. To see the video, click “PLAY VIDEO“. 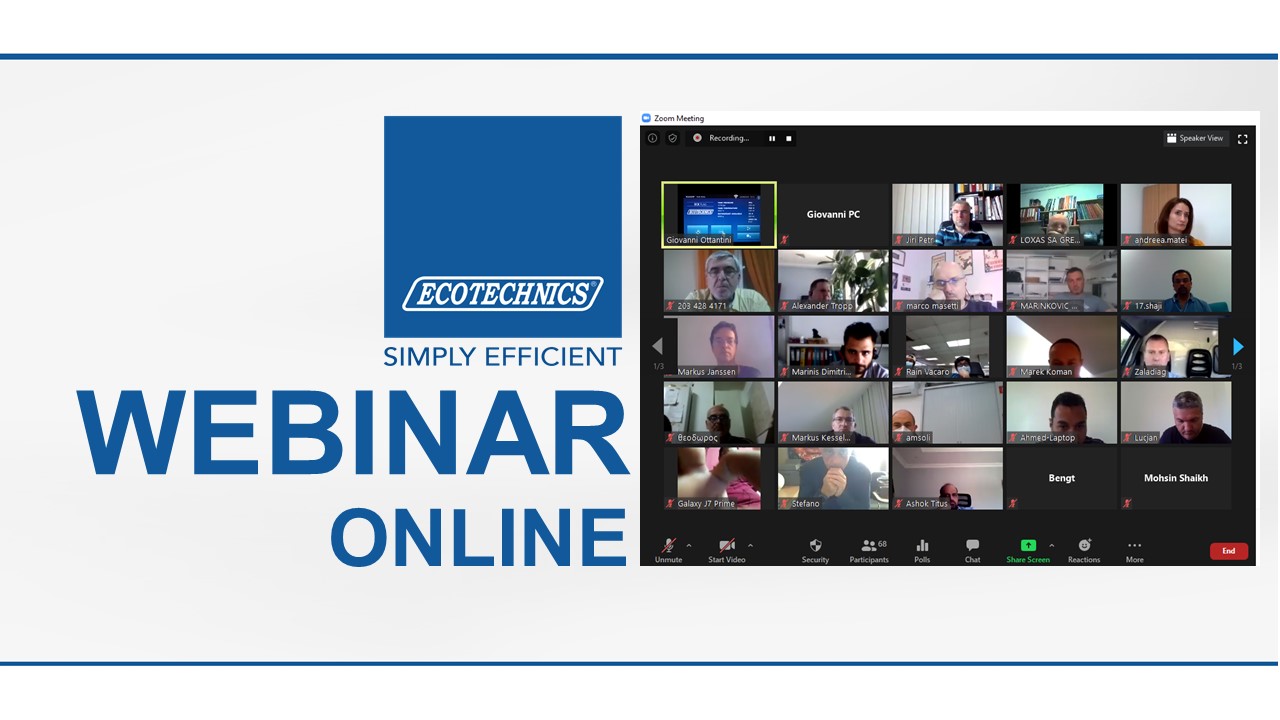 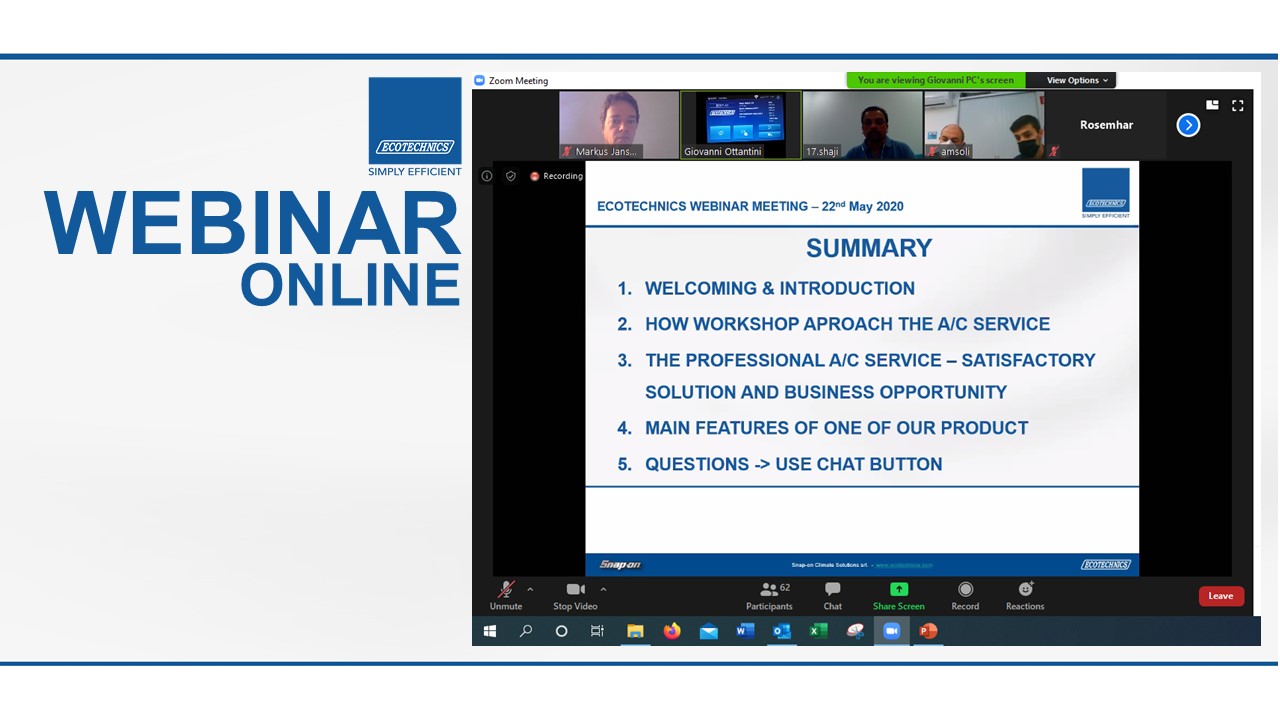 A/C SERVICE: TO BE DONE AS NEVER BEFORE. RECOMMENDATIONS AND BEST PRACTICES

The participation of over 60 Partners highlighted the success of the initiative and above all the sensitivity of the current market towards the professional climate service that a garage must be able to provide to its customer.

We thank all the participants for their contribution to make the Webinar still more interesting and professional. SCS gives you all an new appointment for the next online event in a few days. 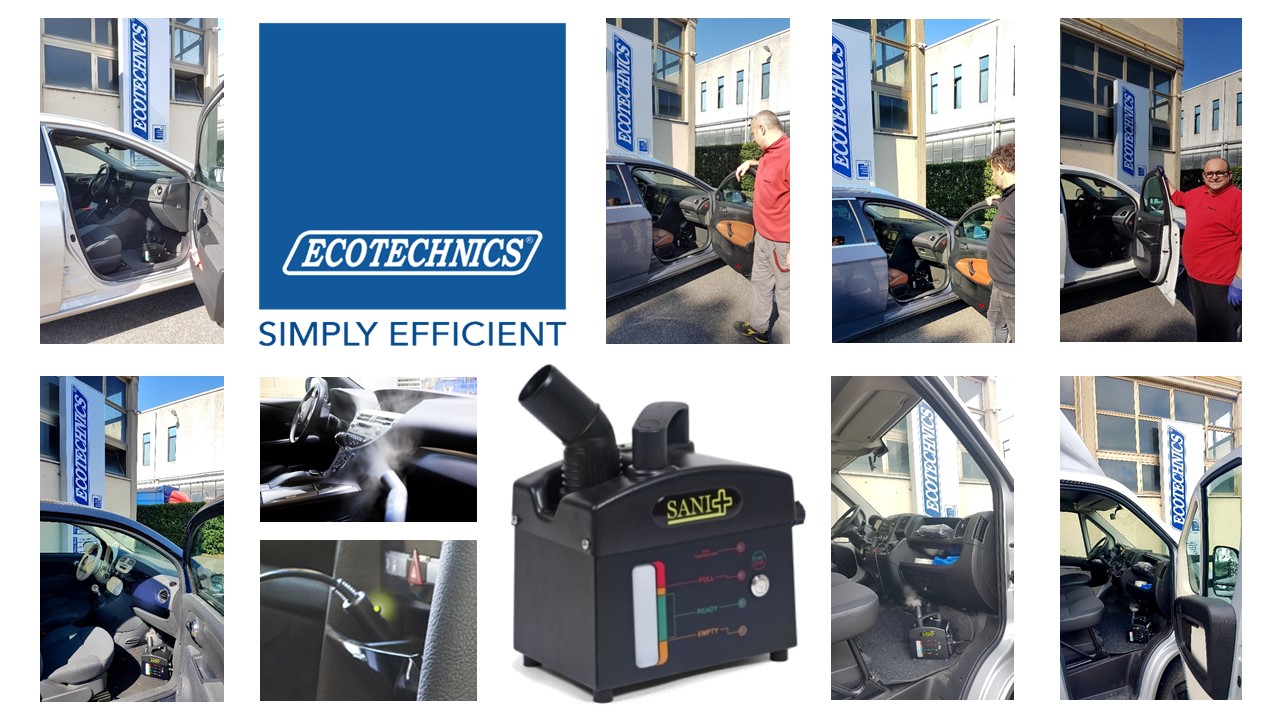 Sanitization is one of the measures contained in the environmental safety protocols for companies.

Snap-On has defined in SAFETY the first of the corporate values. The sanitization processes of the environments can and must also be carried out in vehicles.

SANIFLUX by Snap-on Climate Solutions is a product used for hygenization of the passenger compartment and the A/C system.

With the aim of implementing every possible intervention for the protection of workers’ health, Snap-On Climate Solutions invited the entire company staff to sanitize their vehicles.

Any cookies that may not be particularly necessary for the website to function and is used specifically to collect user personal data via analytics, ads, other embedded contents are termed as non-necessary cookies. It is mandatory to procure user consent prior to running these cookies on your website.